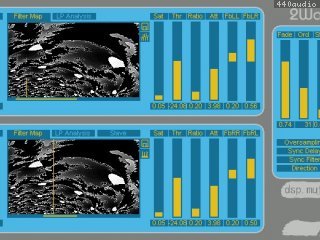 # Signal flow was wrong (!) with WIIR lattice output fed directly into effect output, instead of only being fed to output after delay/compressor stage. This caused, in particular, a heavy DC bias to effectively mute one of the channels

# Interface was largely as-is Cocoa. For better or worse, it's now visually much closer to the Windows version. Still Cocoa-based, though (no Carbon-only host support).

# Bitmap geometry changes were not correct

# Compressor was acting funny. Is not same as Windows version; will look into why for next version. Should still be better now than before

# zlib dylib dependency may have been causing trouble for some