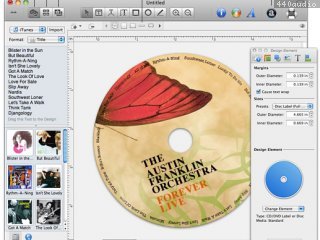 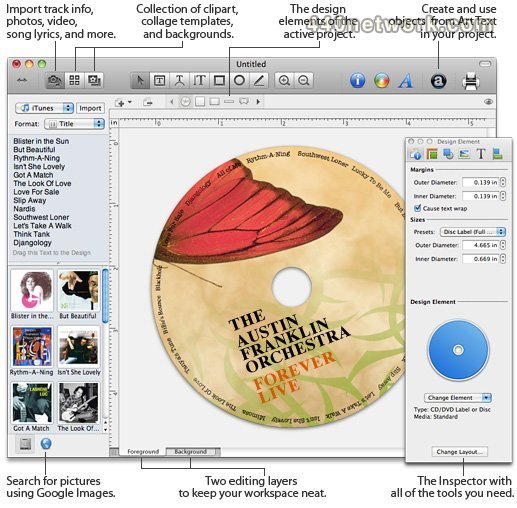 Fixed the problem with reading track names and tag information from AAC and AIFF files imported from a folder on the disc;
Canon Tray H dimensions (for the PIXMA Pro-1 printer) have been corrected;
Fixed the problem where an alert appearing after an attempt to add a DiscT@2 design element without the compatible device connected could not be closed with the OK button;
Fixed the problem where closing the Options window in the Print dialog by clicking the red round [x] button would block further input from user.

Disc Cover v 3.0.6 16 déc. 2011 MacOS X UB
Télécharger la MAJ
Version 3.0.6 features the following enhancements:
Fixed the problem with the Internet picture search not functioning correctly.
Fixed the crash that ocurred when attempting to burn more than one copy of a Lightscribe disc.

Version 3.0.5 features the following enhancements:
Corrected the problem with blurred shadows not displaying and printing properly in OS X 10.7 Lion.
Fixed the bug when objects added to a Master page of a multipage booklet would appear on a layout page instead.
Enter/Exit Full Screen menu item and shortcut added (OS X 10.7 Lion only).
A message is now displayed when the user attempts to save a locked file (OS X 10.7 Lion only).