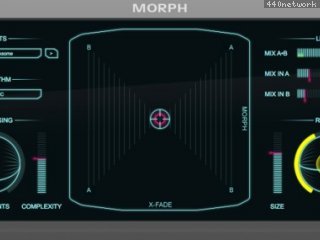 Morph v 1.3.4 5 janv. 2011 MacOS X UB
This version improves general stability and fixes several issues that have been reported by our customers, including numerical instabilities on PPC systems. This version also includes a separate MacOS X 10.4/Carbon compatible build, which will likely be the last build that we'll release for this legacy OS.

Morph v 1.3.3 6 déc. 2010 MacOS X UB
This version fixes a problem where the vocoder's keyboard was inaccessible on some hosts (PreSonus StudioOne in particular), it adds support for pitch bend to the vocoder's built-in synth and fixes an issue where morph refused to load on some systems due to a dylib link error. This update is highly recommended for all users of the two products. New demo versions have also been made available.

Morph v 1.3.2 4 nov. 2010 MacOS X UB
This update makes plug-in fully 64bit compatible and improves compatibility and overall performance. This update installs the 32/64bit Cocoa version of the plug in by default and requires MacOS X 10.5 or better. A 32bit legacy Carbon compatible version is provided for manual installation in order to be backward compatible with older hosts that do no support Cocoa.

Morph v 1.2.5 15 juin 2009 MacOS X UB
This update improves the performance of morph AU in hosts that do not yet fully support the Cocoa interface technology, such as Ableton Live 6 and newer, and DSP Quattro. Click the plug-in product name in the plug-in window to see a full list of changes and additions.
plus...

Morph v 1.2.0 16 sept. 2008 MacOS X UB
This update enables morph in hosts that do not support the Cocoa interface technology, such as Ableton Live 6 and newer, and Digital Performer. Click the plug-in product name in the plug-in window to see a full list of changes and additions.

Morph v 1.10 16 avril 2008 MacOS X UB
This version improves overall stability of the program and fixes bugs in the underlying framework that have been reported by our users over the past months. It also displays a warning screen with further details on hosts that do not support Cocoa AudioUnit plug ins.