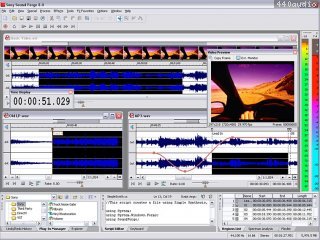 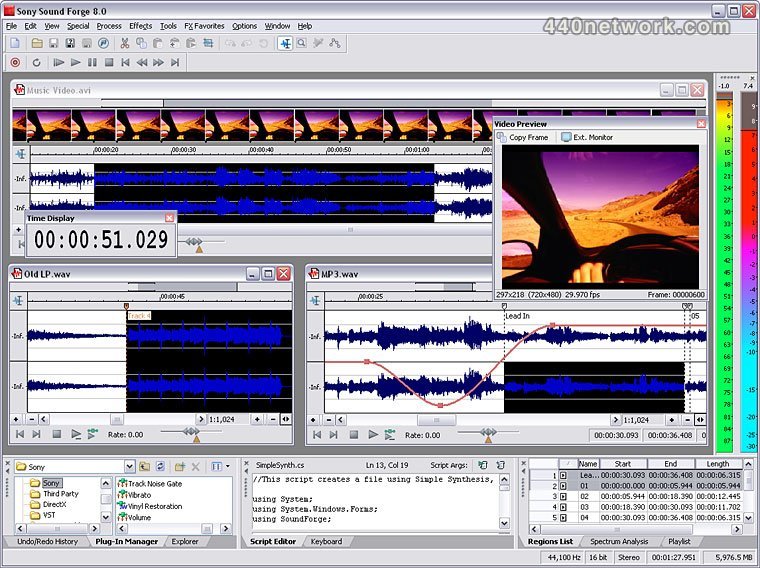 SoundForge v 2.0.1 Mar 1, 2014 MacOS X Intel
Download Demo Download Update
Added support for reading and writing OGG files.
Added automatic snapping to zero crossings (Options > Snapping > Zero Crossings).
Fixed a bug that could cause the incorrect fade type to be selected when changing the fade type of overlapping events.
Fixed a bug that could prevent very large project files (> 4 GB) from opening.
Fixed a bug that caused Sound Forge Pro Mac to start only for the user account that was used to install the application.

Auto Trim/Crop tool. Automatically remove unnecessary silence in a sound file while fading the edges of program segments in and out with user-controlled fade lengths.

SoundForge v 1.0.21 Nov 15, 2012 MacOS X Intel
Download Update
When playing mono files, audio is now played through channels 1 and 2. You can use the Audio tab in the Preferences dialog to assign channels from multichannel audio files to outputs on your sound card.
You can now set default event curve types (Options > Event > Default Fade In/Out).
Added a Trim command to the Edit menu.
Fixed a problem that could cause a crash on certain systems during automatic window restoration (startup).
Fixed issues that could cause crashes and drawing issues during resizing and full-screen transitions.
Fixed a problem with importing and exporting mp3 metadata.
Fixed an issue importing markers and regions that are past the end of a file.
Addressed drawing issues with certain buttons under Mountain Lion.
Fixed issues with event snapping.
Meter channels now update immediately on tab changes.
The Process button is no longer unavailable during process and effect previewing.


* The Loop Tuner window has been reimplemented an independent tool window.
* Added support for LPEC files imported from Digital Voice Editor software.
* Added support for WAV files up to 4 GB. Select the Allow Wave renders up to 4 GB check box on the General page of the Preferences dialog to enable support.
* Several Mix/Replace improvements have been implemented:
o Envelopes are now drawn when performing drag-and-drop mixes to indicate mix and fade-in and fade-out levels.
o If a selection exists in your destination data window, the selection is now preserved after mixing sound data.
o Markers are now added at the correct positions when you perform mixes with Options > Paste Events turned on.
o The end of the file is now used as a snap point when performing drag-and-drop mixes.
o A new setting has been added to the Editing tab in the Preferences dialog. Select the Auto-crossfade Mix with selection check box if you want the Fade In and Fade Out settings for the Mix tool to pay attention to the destination selection and file length when mixing between files.
* You can now hold Ctrl while dragging in a data window to switch to the Magnify tool temporarily (as in Sound Forge 8.0). Select the Allow Ctrl+drag style zoom in data windows check box on the General tab of the Preferences dialog to enable this behavior.
* Toggling a selection (using the S or \ key) now restores channel selection.
* The Lock Loop/Region Length command is now honored when multiple markers or regions are selected.
* A bug has been fixed that could cause black frames/silence when overwriting an open MPEG file.
* A bug has been fixed that could cause gapping when playing from the Plug-in Chainer and positioning the cursor if Options > Seek Cursor on Playback was not selected.
* When selecting up to a marker that occurs on the last sample of a file, the last sample is now included in the selection.


* An Update loop bar on Mark In/Out check box has been added to the Editing tab in the Preferences dialog
- Select this check box if you want want to update the loop bar in a data window when you mark the beginning or end of a selection.
- When the check box is cleared, the loop bar isn't updated until after you've marked both ends of the selection.
* A Seek Cursor on Playback command has been added to the Options menu. When this command is selected, playback will restart when you position the cursor.
* The keyboard shortcut for saving and recalling views has changed. The new shortcuts are Ctrl+Shift+

SoundForge v 8.0 Jan 6, 2006 Windows
Customizable keyboard mappings.
VST effect support.
ASIO audio driver support.
Data window scrubbing.
Application scripting with an integrated Script Editor window.
Batch processing and file-format conversion via the Batch Converter script.
Ability to save a project path in a rendered file and edit a rendered file's source project.
You can now choose the Ruler Format and Level Format for data displayed in the Statistics window.
You can copy the contents of the Statistics window to the clipboard for easy comparison of multiple files.
Integration with CD Architect.
Macromedia Flash (.swf) format importing. (ActionScript, motion video, and audio are not supported.)
You can use the Display tab in the Preferences dialog to adjust the icon color saturation and icon tinting.
HDV project and rendering templates (AVI, MPEG-2, and Windows Media Video) have been added.

Other Software by Sony Creative Software (3)