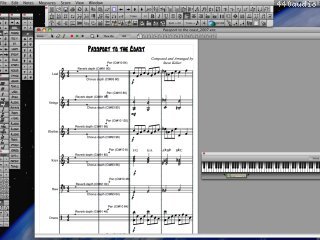 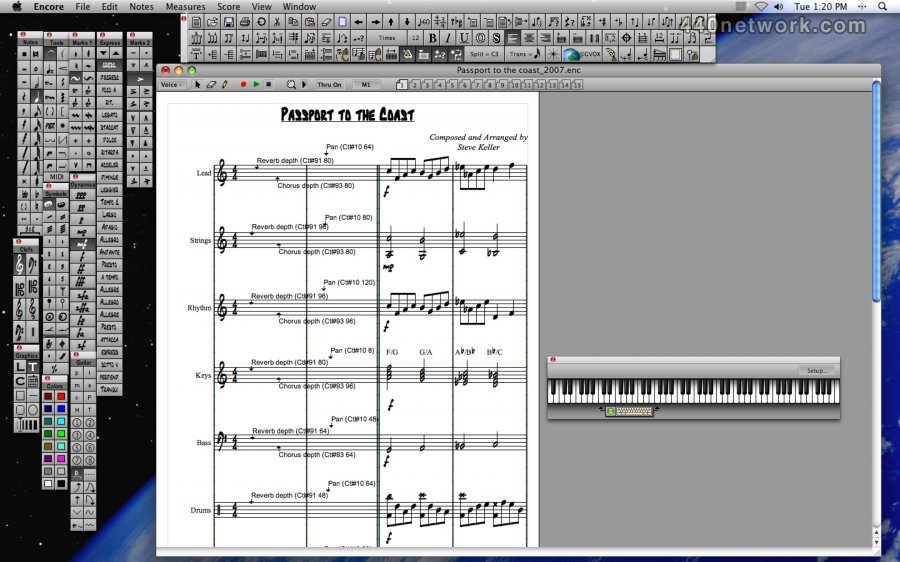 The most simple and user-friendly music score editor, get out of a confused period (original editor out of biseness, ghostly purchaser, Mac OS 9 & X crash with new version).
Since 4.5.4 version, we can say that one of the pioneer of musical score editing is back on Mac again and good alternative to heavyweights of this category such Finale or Sibelius.
G3 CPU or better, 32MB of RAM, 16MB Hard Disk space Mac OS 10.3 or higher
Pentium class CPU or greater, 32MB of RAM, SVGA video, PC running Windows XP, Vista or Windows 7

Encore v 5.0.5 Jul 29, 2010 MacOS X UB
NEW FUNCTIONALITY
Added a "safe save" feature on Windows, to prevent corruption if crash during saving, etc. -- it also allows You can now access the last 20 saved versions in C:\Users\

Encore v 4.5.6.4 Aug 4, 2006 MacOS X PPC
Installation/Registration
Installation is now simply "drag and drop".
After opening the .dmg file, drag Encore to your hard drive - most likely to your Applications folder.
Encore runs in "Demo" mode by default.  To enable the full features, launch Encore, then select "About Encore" from the "Encore" Menu.  A dialog box will appear where you must enter the serial number given to you when purchasing the product.
To register Encore for all users on one computer, you must log in to an administrator's account before submitting the serial number.

Files Created in Older Versions
You can open files created in older versions of Encore, MusicTime Deluxe, or Master Tracks Pro. When opening an older file, it is advised to immediately choose "save as", creating a new file. Then close and reopen the new file before working with the document.

Preferences and Templates
Application preferences are now saved automatically every time you quit the application. If you want to set score-specific defaults for new documents, you must use a template file. Create a score with all the settings you want for the template, then choose "Save Settings to Template" from the "Setup" menu. The template file will be saved in the user's ~/Library/Application Support/GVOX/Templates folder.

New Fonts
We have experimentally added a "handwritten" font to this version.  You can turn the font on from the application's "Setup" menu.  Note that currently that this is an application-wide option, you cannot save the font setting per-document.  Two text fonts that match the graphics are also included, called "NorText" and "NorTextExtra".

Keyboard Shortcuts
Spacebar now starts/stops playback in edit mode, as well as select mode.
'A' and 'P' keys each now act as a toggle between edit and select modes.
Cmd-; is now the shortcut for "Show/Hide"
Shift-cmd-B is now the shortcut for "Beam Group"
Shortcuts for "Save As", "Page Setup", and "Align Playback" have been added.
Added quick-keys for New Chord dialog, reflecting Windows version:
[ only works when 'custom' button is off -- a-g = roots, A-G = bass, 3-4 = root #/b, #-$ = bass #/b ]

Other changes to 4.5.6
Live scrolling and resizing for Score and Staff Windows.
Added standard "Window" Menu Functionality.
Created new windows for some dialog boxes, some of which now allow you to see results "live" while changing settings and before closing the window.
Added playing of note with shift-select.
Printing is now allowed in Demo mode, with "DEMO" text overlaid.
Changed  MIDI Thru to default to "follow staff"
Click can now be sent on any MIDI Device in the popup menu.
Set default channel for new percussion staves to 10.
Made drum map default to GM for new percussion staff.
Now can open files without write permission as an untitled, unsaved file.

Treating Apple's built-in synthesizer as a Device, allowing external and built-in devices to be used simultaneously.
The addition of Virtual Ports. When selected in the MIDI Setup Window, Encore presents an input and output port for other applications to send and receive MIDI data.

Buck2
version 4.5.6, MacOS X PPC
The newest upgrade for Encore 5.03 is a disaster. I have had to go back to 4.x.x There are serious alignment problems, there are serious tie and slur problems. It is simply a face lift from 4 but now there are more bugs than before. Buyer beware

alex.lyons
version 4.5.6.1, MacOS X PPC
Don't be tempted by the faster speed, less cpu-intensive event loop and slicker UI - this version contains some serious bugs that cause random crashes (particularly when editing lyrics) and can corrupt your files. Stick with 4.5.5 until these are fixed - the older version may be slow, but its bugs are less catastrophic.