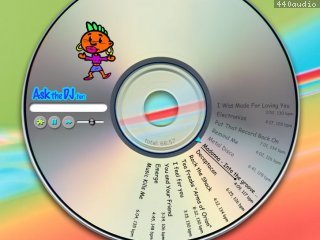 by The Wild Bits
Add to WatchList Developer's Website

AskTheDJ analyses beats to perform truly seamless transitions between tracks. Like a real DJ, it matches beats and adapts tempos whenever needed so the music always flows, even when cross-fading between tracks with different bpms.
AskTheDJ also cuts unrhythmical intros and outros, and levels volume. Better yet, all this is done automatically. You just need to click Play and dance. You can also export Ask the DJ's mix art to audio files, suitable for burning audio CDs. AskTheDJ produces perfect transitions, even when mixing tracks with different tempos.
Requires Mac OS X version 10.3.9 or better

ayumix828
version 1.3, MacOS X PPC
A lot of Thanks for nice application!!!
ican not difficult English, I am very happy Music life!
thanks you. ayumix828@yahoo.co.jp or chemuler88@mac.com

valiant66
version 1.5, MacOS X PPC
I registered this because I had a party emergency, where I had to be both host and DJ, so couldn't hover over mixing board all night. It worked as advertised and as per the job description I would rate it somewhere between Very Good and Excellent. As far as I can tell, there's no other software on the market that offers the beatmixing, set-it-and-forget-it, no-dead-air features of Ask The DJ.
However, there are several missing features that drag ATDJ down to merely Good. They are related mostly to timing information.
1a. There is no total time of a playlist. Perhaps this is because of the beat-mixing feature, but even an approximate guess would be more useful than none at all. Why? Because I needed to know if I had, say, about an hour of music cued up and could then go be a host for 50 minutes.
1b. ATDJ features a playlist-export feature to burn you mixes, but unless you know how long the playlist is, you don't know if it will fit onto a CD or not. 1a & b knocked off a star.
2. You can't toggle song length information -- e.g. total time, played time, and (most important) remaining time for a song. This is a basic DJ feature of any digital playback mechanism, be it from CDs or from HD. I didn't need it for the party, but all the same it should be there. There is a progress bar that proceeds through the song, but it's not as accurate as a countdown (or even looking down at a needle to see how many grooves are left in a track on an LP).
3. And finally, even though you can export the songs from a mix to burn to CD, you can't export the playlist! After the party I wanted a list of the songs I had played so I could share it with people, but there was no way to get it out of ATDJ. And the same applies if you are burning a CD. The only way to print the songs onto a jewel-case insert is to TYPE THEM OUT BY HAND! This cost another star, and is a glaring error.
However, if you don't need to know how long your playlists are, or have a list of what you're playing, then I can recommend this software.

Other Software by The Wild Bits (3)

Tunatic
Miscellaneous / MiscellaneousThe Wild Bits
Song recognition. Ever thought 'what is this song?' Let Tunatic hear it and you will get the artist's name and the song's title within seconds. Tunatic is the very first song...

Ask the DJ
The Wild Bits