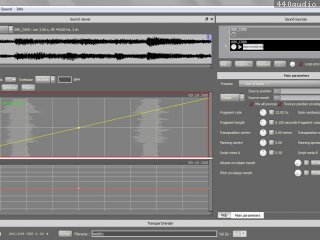 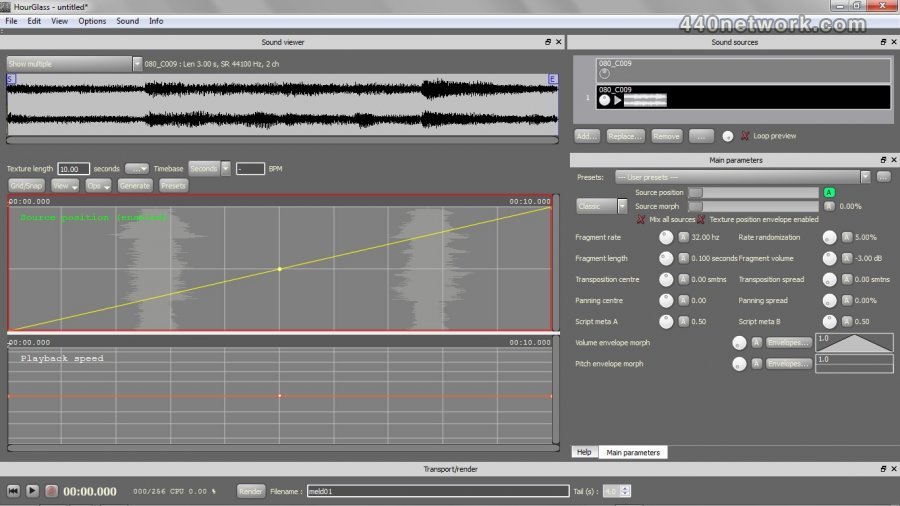 HourGlass v 1.4.5 Mar 11, 2014 Windows
Download
Preliminary feature to allow envelopes to play at different rates, as a multiplier of the texture length. (ie, if the texture length is 8 seconds, setting an envelope rate of 8 will make that envelope play 8 times during the whole texture.) The dial allows changing the speed to some common multiples of the texture length, the text box can be used to enter a free rate multiplier between 0.001 and 1024. This feature currently conflicts with the looped texture playback. The workaround is to disable the looped playback. (The sounding result will however effectively still be looped for most envelopes.) Also, when offline rendering, longer progressions of multiple playback rates might not evolve as far as desired, as the offline rendering ends at the texture length plus the tail length. The workaround is to use the live output recording feature. I will try to come up with some solutions to these in the future.
Maximum voice count increased from 256 to 512. It will depend on the computer capabilities, the used resampler mode and use of multithreaded voice processing if all the voices can actually play.
While making the above change, I noticed a performance problem with high voice counts, which hopefully is now fixed.
Sound volume to envelope converter window length now has name and value labels in the GUI
The offline chain processing progress indicator would sometimes get stuck over the waveform view, hopefully now fixed