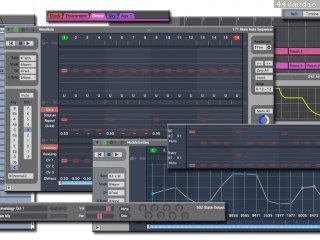 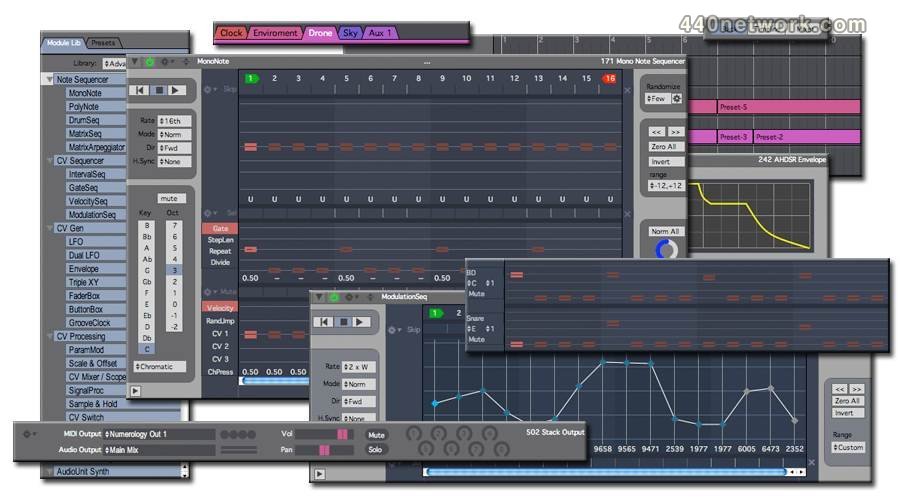 Numerology is a revolutionary new MIDI sequencer, it is a modular sequencing environment designed for performing musicians. It works by giving the user an organized workspace within which they can quickly create and connect together a variety of highly functional sequencing and MIDI event generating modules. As a fully modular environment, the user can construct sequencing instruments that fit their own unique and twisted requirements. The sequencers follow a model similar to that used by analog sequencers: the user creates sequences of control values that can be routed to other modules to control generation of notes or MIDI CC and Pitch Bend messages.
Mac OS 10.6.8 or later


?- SampleKit : A new sample-playback module with zoomable waveforms and a flexible synthesis engine.

Numerology v 3.1.1 Nov 9, 2011 MacOS X UB
Download Update
An update release with various tweaks and improvements, including a latency fix for both the N3 VST & AU, a few Lion fixes, a couple fixes for large files, and various other improvements.

Stack Export : Fixed a problem related to renaming the stack on export.

OSC: There is now a preference to turn OSC on and off. It is off by default, so if you use OSC, be sure to turn it on!

New in this version is control support for the Novation Launchpad. This allows you to program and control all the "Note Sequencer" modules in Numerology from the Launchpad, which includes the MonoNote, PolyNote, Chord Seq, Drum Seq, Matrix Seq and Matrix Arpeggiator. In addition, there is a dedicated mode for triggering presets and for accessing the most important settings of the Mixer.

Numerology v 2.1 Jun 10, 2009 MacOS X UB
Numerology 2.1's new ReWire driver now offers full support for running Audio Unit plugins, including their editor windows. This innovative feature allows the user to seamlessly integrate Numerology with ReWire host applications while maintaing nearly all features that are present when running standalone, the only missing item being audio input. Other improvements to the ReWire implementation include the addition of 30 audio output channels, bringing the total to 16 stereo pairs. This driver also includes fixes to some transport related problems, and much reduced CPU overhead.

The new Chord Sequencer module makes it easy to build chord progressions using a series of sequenced high-level parameters, including scale degree (I, IV, V, etc), chord family and type (including 10 types of 7th chords), inversion, spacing and octave offset. The Chord Sequencer also includes options to strum and arpeggiate the notes of a chord, or to play them as "broken" chords. Whether the user is complete newbie or a seasoned pro the Chord Sequencer makes building and experimenting with chord progressions a quick and enjoyable task.

Numerology's MonoNote, PolyNote and Drum Sequencer modules now offer both real-time and step-time sequence recording options. This feature allows you to program steps from a MIDI keyboard and, in conjunction with several other features of Numerology's sequencing modules, opens up several interesting compositional options including "sound on sound" looped composition, and generative auto-accompaniment.

Other new features in Numerology 2.1 include:


And, of course, many general fixes and updates. The complete list of changes can be found in the readme file included with all Numerology installations.

Numerology v 2.0.1 Mar 1, 2009 MacOS X UB
This release includes many fixes and improvements, as well as couple of handy new features, including .mp3 and .m4a file support for the AudioSample and DrumKit modules, and "on the fly" audio recording support.


that are longer (more than about 1/30 of a second), but for short, 'oscillator'-type loops, it is quite amazing -- it gives you hard-sync types of timbral modulation while keeping the base pitch steady.

I've begun to review the doc and address ITS problems :), staring with the reference pages -- you'll be able to identify them as they have the "DRAFT"
tag removed from their titles. There are also new ref doc pages for the AudioSample and DrumKit modules.

This is a deceptively simple module, so there are some important details I would like to point out:

- you can tweak the kit settings for each stack preset if you like
(or use the module menu "Copy Params To All Presets" to do otherwise,
or put the DrumKit module in a stack separate from your DrumSeq's)

- You can modulate the crap out of any param easily.

- You can use as many DrumKit modules as you like.

Audio Sample:
- tweaked the note-stealing process to be less 'clicky'
- now has an adjustable cross-fade parameter
- now has adjustable velocity sensitivity
- now has a pan control
- re-calibrated volume control
- tuning is now in +/- some number of semitones

Along with the cross fade, I've instituted some new constraints on the looping paramters:

These rules are there so that cross-fade algorithm has a known set of conditions to deal with. As I get more time to work on the sample-playback algorithm, I may relex them.

Now, when you save a project that includes an AudioSample or DrumKit module, you will be asked if you would like to copy the samples into the media folder for that project. If you chose to do so, they will be copied into a folder called "AudioSamples" within the media folder.

In the module menu for each module (on the left-side of the module header), there is now an option to export the module. This will create a file with the extension ".nmod", and an accompanying media folder (if appropriate). If the module is an AudioSample or DrumKit, all samples will be copied in automatically. You will also have the option of making a .zip archive of the result. That .zip file is what you should use to share modules.

Exported modules include only the settings for the preset that is current when they are exported -- this is to avoid odd behavior when importing a module into a stack that already has several presets. If you want to share a module that has multiple presets, see the instructions in the "File Exchange : Stacks" forum at five12.net.

This item is in the Stack menu, and allows you to import .nmod files into the current stack.

Once again, the spectre of VST-originated behavior within some AudioUnits has made its unwelcome appearance. In this case it means that Numerology can only safely load AU Presets for an AudioUnit on the main UI thread. I have implemented this behavior with the new build, which should improve AU reliability significantly, but it has two important ramifications: Numerology can no longer change AU presets when Numerology Stack presets change (as there are unresolvable timing issues), and Numerology can no longer load AU presets when in ReWire mode.

Here is the example that forces me into this decision:

What should probably happen is that the AU should return an error code when the host tries to set the AU preset data, then also report the error to the user, when the user opens the UI for that AudioUnit.

In addition to setting the AU preset when a session loads, Numerology (before now) could also change the AU preset when changing stack presets, and did so in a sample-accurate manner. For some 'large' AudioUnits, this was of limited usefulness (as it could cause glitches), but for the 'smaller' ones (i.e. anything from Apple, and many others), it allowed us the luxury of being able to tweak AU parameters for each of the presets in a stack (just like you can for Numerology's 'native' modules). I may restore this behavior later on, for AU's that can handle it, but it is off for now.

The new behavior is as follows:


If you need to simulate the prior behavior, there are a couple of options:

You can now set custom names for each pair of audio inputs and outputs, as well as enable & disable I/O in stereo pairs. Settings are saved per-device, so you can have custom settings for each device. The deviced used is the currently active one, so if you go into Preferences and change the audio device, you'll have to restart Numerology before you can edit the PatchbaySetup for that device.

The default audio I/O setup (which what you'll all get when you startup), only the first pair of inputs and outpus are enabled, so if you use lots of I/O, you will need to manually enable them. The first pair of audio outputs are always enabled.


Memory Management
I've rewritten some of Numerology's internal memory management code, and fixed several crashes and other conditions that could cause crashes, including one that could happen when starting up, and another that tended to happen when opening files.

which should be needed only in rare circumstances. To activeate it,
run this command from any Terminal window:
defaults write com.five12.Numerology "ShutoffSongPosPtr" "YES


ensure that incoming values are quantized when appropriate, and so that
the UI does not display a value different from what the sequencer outputs.


not tested on 10.3.8 or earlier versions of Quicktime. If you see any issues
with earlier versions, let me know, but the two versions listed above will be the only officially supported versions.


other plugins based on the UVI engine. Please report any problems.

arnolfo
version 2.0, MacOS X UB
This is a great software made greater!

tunepoet
version 1.3, MacOS X PPC
Quite possibly the quickest $100 bucks I did not intend to spend tomorrow. Just when you thought the general midi sounds had no more life in them, not! It is amazing how something so seemingly random, can produce music so seemingly deliberate. Make quality sounds right now, no waiting! Numerology is a whole lot more than the sum of it's parts. The live synths built into Reaktor sound very cool, but you find you pretty much get the same cool sound, 200 different ways. Numerology produces completely unique and diverse sounds, and never seems like it can hit a creative brick wall. Something new is always at your finger tips. I already feel a bit possessive of the program. MINEMINEMINEMINE! Remember when you were the only guy into that way cool band before they got hugely famous? Well, Numerology - say you were there before that happened.
Blessings,
Damon

dubster
version 1.3, MacOS X PPC
If you want to pattern-sequence a hardware synth in OSX, i say get this NOW! I used combined with Novation A-station and digi002 rack, worked seamlessly and awesome sound. Very cool indeed.