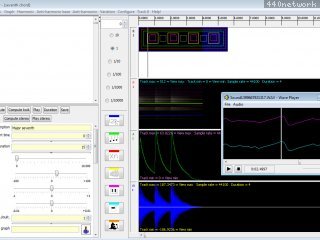 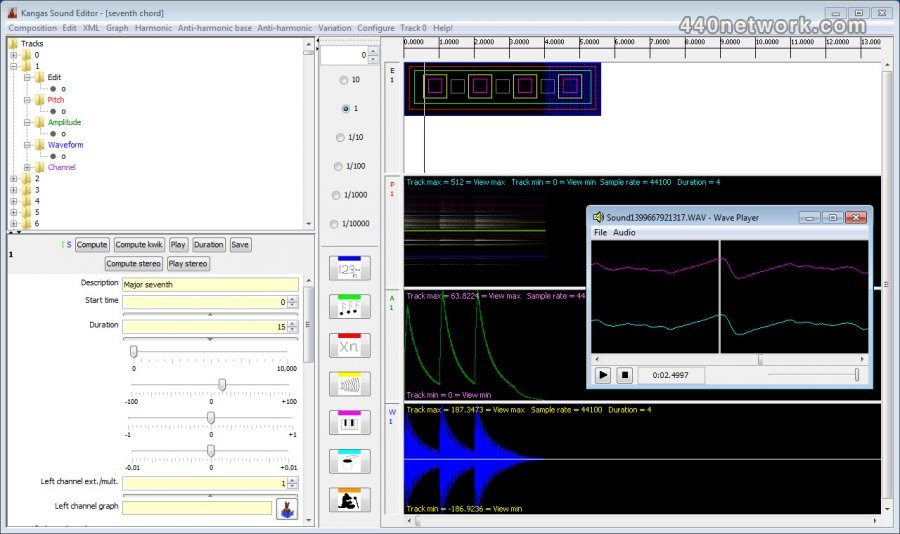 Kangaroo-themed program that allows the user to create music and sound effects. Uses a system of frequency ratios for pitch control, rather than conventional music notation and equal temperament. Allows instruments, both musical and percussion, to be created

Features
- The user can create music and sound-effects with it.
- It uses a system of frequency ratios for pitch control, rather than conventional music notation.
- Instruments, both melodic and percussion, can be created from scratch by specifying harmonics/inharmonics.
- There is a cellular-like structure to compositions, with cells representing entities at a low level of abstraction (e.g. harmonics) and at a higher level of abstraction (e.g. chord groups).
- User-definable graphs are widely used in the program, e.g. for control of volume and pitch envelopes, and for shifting the balance of stereo over time.
- Audio output is to uncompressed .WAV files.
- From version 3, users can collaborate with and build on the work of other users through an XML import/export facility.
less...
MySQL Server 5.1 or later (not necessary for Kangas Sound Editor QI) Java SE Runtime Environment 6 or later
Java Runtime Environment Version 7 or later. MySQL Community Server 5.1 or later.

Kangas Sound Editor v 3.2.2 Nov 23, 2013 MacOS X Intel
Download
This is a bug fix/maintenance release that extends the functionality
of release 3.2.1 of the software. This is the first 3.2.x release of
the Kangas Sound Editor on Mac OS X, so it is the first time features
introduced in 3.2 are available on this platform. See release notes for
3.2.0 and 3.2.1 for details of changes there. Here is a list of 3.2.2 changes:

7. Improved display of Variations. Flags graphs now have a smaller font size.
The weight of flags graphs has been increased relative to their labels, to
fix a bug whereby just the labels were shown if the window was shrunk so
there was insufficient space to display both graph and labels. A low minimum
vertical size has been given to flags labels, to make it easier for the divider
containing the graphs (including the flags graphs) to be moved.

8. Fixed bug in volume calculation for Repetition Groups. This could also affect
duration, as Sound boxes may set a duration proportional to volume.

What's new in version 4.0.0 of the Kangas Sound Editor

Edit Panels now have vertical scroll bars if needed, and have a white background.

New functions to delete tracks, and copy/move/delete a range of Sequence boxes have been added.

An indicator (*) now appears next to the composition title if there are unsaved edits.

Edit Panel tree-nodes are now topmost for a given track.

The Sequence button is now topmost/leftmost in the toolbar (depending on its orientation).

General improvements have been made to dialogs.

"Help on the web" and About dialogs are now modeless, and have been redesigned.

Properties toolbar displays the track number of the displayed properties, but is no longer draggable.

Kangas Sound Editor QI
Audio Production / ExperimentalKangaSound
Sound and music creation. This kangaroo-themed program allows the user to create their own music and sound effects, effectively from scratch. This program differs from the Kangas Sound...