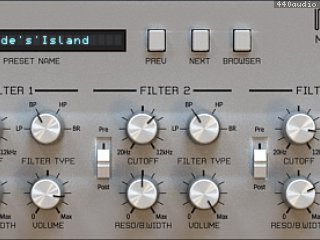 First Fx Plugin from d16 group "Silver Collection", Devastor is a simple but remarkable Multiband Distortion Unit. It is an enhanced version of the distortion unit from their synth Phoscyon.

Devastor consists of three blocks: dynamic-gain module, diode-clipper distortion and three filter sections. Each of the filters can process the signal before or after the diode-clipper. The filters are not the peaking EQ type which are used in classic multiband distortion They are like those found in analogue synthesizers (low pass, high pass, band pass and band reject)- with adjustable resonance and cutoff.

Decimort
Audio Production / Plug-ins & effectsD16 Group
Bit crusher. Electronic music producers (especially in Hip-Hop) have always been aware that classic samplers (such as early Akai and EMU units) had a character and sound of...

Drumazon
Audio Production / Virtual InstrumentsD16 Group
909 emulation. Drumazon synthesis emulates all the sounds of the original 909. All the instruments are synthesized in exactly the same way as the original. All the nuances and...

Fazortan
Audio Production / Plug-ins & effectsD16 Group
Phaser. Fazortan is a controllable space phaser based on a retro phaser from the 70s but it has been expanded to take advantage of the flexibility software can provide....

LuSH-101
Audio Production / Virtual InstrumentsD16 Group
Multitimbral polyphonic synthesizer. LuSH-101 is a synthesizer created from modules that can be found in many modern virtual synthesizers, all combined into a single compact and logically intuitive...

Nithonat
Audio Production / Virtual InstrumentsD16 Group
Drum machine based on Roland 606. Nithonat is a fully synthesized drum machine based on the classic 606. The unique sound of this machine has been used by many artists over the years in the...

Tekturon
Audio Production / Plug-ins & effectsD16 Group
Multitap-delay. Tekturon is a multitap-delay effect with 16 independent, high-quality delay lines. What really sets it apart from other, similar products, however, is the way...