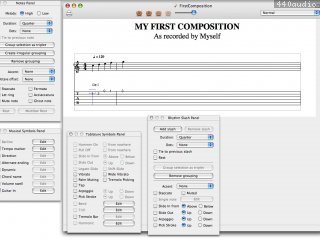 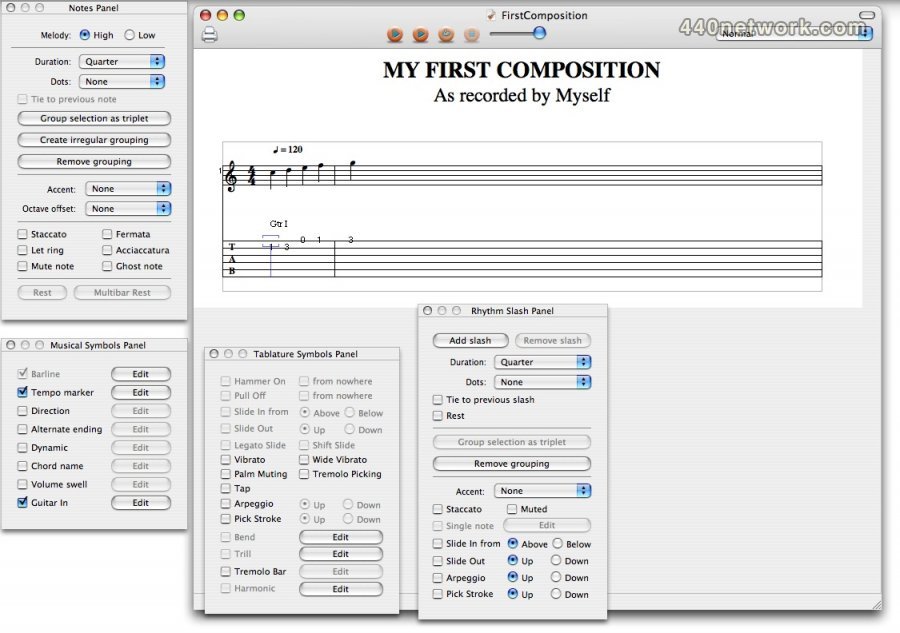 Tablatures is a tablature editor for Mac OS X.

Tablatures is compatible with PowerTab, which is a well-known and widely adopted tablature editor for Windows systems. Thus you can share your music even with those members of your band that don't own a Mac! Moreover, you can easily find thousands of song transcriptions in this format on the net.

With Tablatures you can also export your tabs in MIDI format, or follow the playback on screen to help your learning process.
OS X 10.6.6 or later

Tablatures v 2.25 Nov 12, 2016 MacOS X Intel
Download Update (2 Ko)
This version adds a printing option to decide whether to use the full page width for the last system, or to cut it short if possible.

Tablatures v 2.24 Oct 23, 2016 MacOS X Intel
Download Update (2 Ko)
Improved responsiveness of MIDI playback
Moved the sections list inside the main window, since the use of drawers has been discouraged
Requires macOS 10.9 or later

Tablatures v 2.23 Sep 3, 2016 MacOS X Intel
Download Update (2 Ko)
This version improves the appearance of the last system in the score when printing it out.

if you delete all the Guitar In symbols in the document, playback will still use the first instrument defined for the score, instead of being muted
revamped the toolbar icons for a more modern look

Tablatures v 2.13 Aug 19, 2014 MacOS X Intel
Download Update (2 Ko)
Added an option to disable the screensaver while documents are open
Added two new configurable shortcuts that enable to extend the current selection to the left or to the right
Improved the import of .gpx documents

Tablatures v 2.12 May 25, 2014 MacOS X Intel
Download Update (2 Ko)
This release contains a couple of improvements for those who need to edit scores with high and low melodies:

Also, a new option has been added among the Prefences: in the â€śStandard Notationâ€ť page, youâ€™ll be able to decide how capoâ€™ed notes should appear.

When editing a chord name, a double click on a row of the Cached Chords Names table will be enough to select the chord and confirm it.
Added a keyboard shortcut to insert a double bar: F
MIDI playback: play legato slides without striking the second note.

Tablatures v 1.39 Oct 28, 2011 MacOS X UB
Download Update (2 Ko)
* Limit the length of helper lines in standard notation, to make them more pleasant when there are few positions in the sys
tem.
* Sometimes wrapping ties were not updated correctly when performing certain edit operations. Fixed.
* Prevent fermata symbols from overlapping on whole notes on the first notation line.
* Draw wrapping tie arcs for rhythm slashes too.
* Updated the Apple Remote support to work with Lion too.

Tablatures v 1.32 Nov 1, 2010 MacOS X UB
* Standard notation: in some cases, tie arcs were not drawn correctly. Fixed.
* Floating texts remain visible even when switching to tablature or standard notation only mode. Only those texts that would have appeared in the hidden parts won't be shown. Editing floating texts in these modes is still not supported.

Tablatures v 1.30 Sep 13, 2010 MacOS X UB
* Added an option to automatically insert barlines.
* Floating texts can be removed by dragging them out of the score.
* Pressing the alt key while starting to move a floating text will clone it.
* Pressing the shift key while moving a floating text will keep it aligned to its original position.
* Tuning dictionary: updated the tunings for banjos.
* Print has been tweaked to exploit the full printable area.
* Added keyboard shortcuts to toggle pick strokes down/up (k/K).

Tablatures v 1.29 Aug 18, 2010 MacOS X UB
* Chord Dictionary: the panel can be resized.
* It's possible to click on the zoom value to edit it, for those who don't always like to use the slider.
* When editing a bend, "Release (gradual)" couldn't be set correctly. Fixed.
* Added a keyboard shortcut to toggle chord names (c).

Tablatures v 1.28 Jun 28, 2010 MacOS X UB
Added support to read and save Unicode strings. This means that now you can use any character set you want (Japanese, Korean, Greek, etcâ€¦) and your texts won't be mangled upon saving.

Tablatures v 1.25 Mar 19, 2010 MacOS X UB
* Fixed a crash occurring when changing the Tablature Staff/Chord Names properties on GuitarPro files.
* Make sure that the last remaining guitar in a score cannot be removed.

Tablatures v 1.18 Sep 9, 2009 MacOS X UB
* Preferences: added an option to save documents automatically every X minutes. Autosaved documents will appear as "name (Autosaved).ptb" in the same directory of the original document, or in "~/Library/Autosave Information" for new, never saved before documents. In case Tablatures crashes, autosaved documents will automatically be reopened.
* Editing the tablature or performing undo/redo while playback was looping over a section could result in a crash. Fixed.
* Fixed a crash that occurred trying to add a system above the first one, when the first one didn't have any tempo markers.

Tablatures v 1.16 Jul 14, 2009 MacOS X UB
Fixed a crash that occurred with scores containing a Guitar In symbol for a non-defined guitar.

Tablatures v 1.15 Jul 2, 2009 MacOS X UB
This release fixes a crash that would happen trying to undo a change in a system containing dynamics.

Tablatures v 1.14 Jun 24, 2009 MacOS X UB
# Mac OS X 10.4 is the new minimum requirement.
# Removed some code needed to work around some OS X 10.3 bugs.
# Expanded the Chord Dictionary with many voicings missing an optional note (e.g. 7th without 5th).
# Save as... will properly change file type to .ptb when used with Guitar Pro documents.

Tablatures v 1.11 Jan 9, 2009 MacOS X UB
* Added floating texts: you can place a text box anywhere you want, simply drag'n'drop the floating text from the Musical Symbols Panel and edit it to your heart's desire.
* Standard notation: consecutive octave offset symbols (e.g. "8va") will be grouped together.
* The beaming algorithm has been improved.

Tablatures v 1.10 Oct 29, 2008 MacOS X UB
* Copy and Paste support has been completely rewritten in order to overcome the shortcomings of the first, simple implementation.
* When deleting a selection, everything inside it will be removed (chord texts, directions, etc...). In the previous version, only notes and barlines were deleted, but that wasn't so intuitive or useful.

TabView
Education and composition / Scores & tablaturesTellini's
View, print and listen to PowerTabs on your Mac. TabView makes it possible to view and print PowerTab tablatures with your Mac. PowerTab is a well-known and widely adopted tablature editor for Windows...