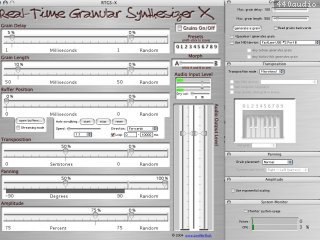 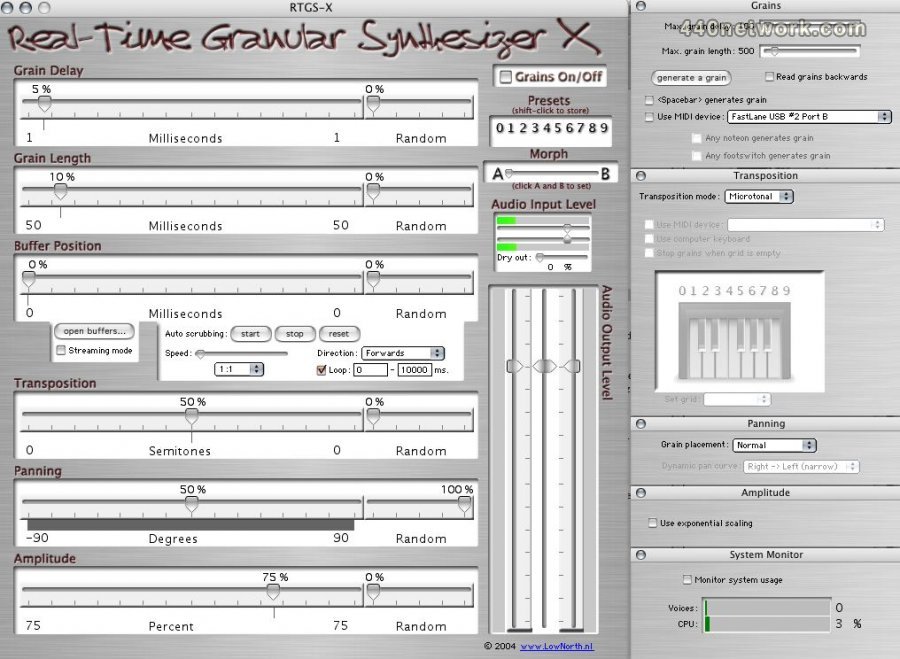 RTGS-X is a Real-Time Granular Synthesizer that can be used to generate brand new sounds or to manipulate and distort existing sounds. It is very useful in generating dense sonic textures, which can evolve quickly or over long periods, to create alien soundscapes. It is also useful for creating short sound effects or sonic motives, which could be used in musical or theatrical situations. One of the most interesting applications of granular synthesis is the manipulation of existing sound through temporal distortion (time stretching, compression, reversal, and fragmentation).
RTGS3 requires a Mac PPC or Intel machine running OS X 10.4.11 or later with 1 GB RAM (2 GB or more recommended) and QuickTime 7.1 or later installed.

New slider interface design, including integration of both the position and randomness setting into a single slider, and new keyboard shortcuts for quicker access to extra features.

Added a setting for Microtonal Resolution to the Transposition Slider.

Added the Open Sound Control protocol, giving access to a wide variety of external OSC devices for use as controllers.

Added the Game Controller protocol, giving access to a wide variety of USB devices for use as controllers.

Added a View Data toggle which lets you monitor all your controller data in a single window.

RTGS-X v 2.4 Feb 10, 2008 MacOS X UB
New features include a video controller which lets you control slider movements with a webcam or the built-in iSight, and some extra options to the little-known "Smoother Buffer Scrub" menu command. It also includes some minor changes which make it run a little smoother in Leopard (OSX10.5)

Loopy C
version 3.1, MacOS X UB
Nice to see this get an update and facelift, still one of my favorite granular devices ;-)

Loopy C
version 2.4, MacOS X UB
Well all this time later and I still find myself marveling at the unique possibilities and usefulness of RTGS-X...well done again LowNorth and thanks for the update ;-)

Loopy C
Since the first OSX release, I have thought this to be one of the best sounding and musically useful implementations of granular synthesis (and I own most of them). With this version, the options are expanded and the bar raised for how granular synthesis can be applied to audio with compositional control. A Happy owner! (be sure to check out Time Toy 3 Extreme for more quality algorithms from this author).

docsavage
Highly creating sound application, it can take some times before you realised the possibilities but when you got them you are taken.

bobdemaa
Works fine on both my G4 computers.
more...