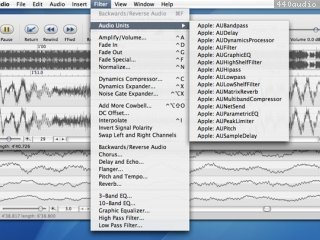 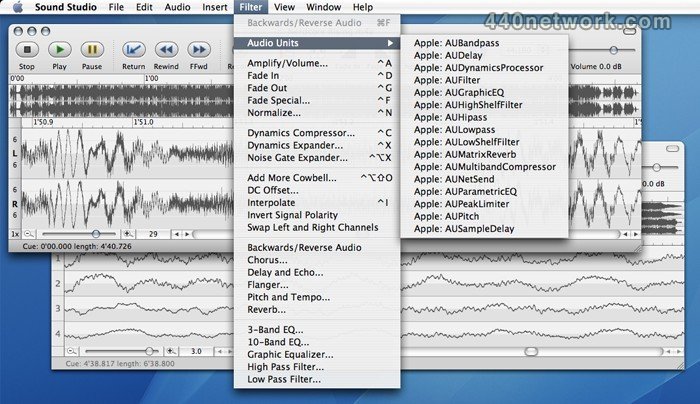 Sound Studio 3 is an easy-to-use Mac OS X application for recording and editing digital audio on your computer. Digitize tapes and vinyl records, record live performances, create your own mixes with crossfades, tweak the levels and EQ, apply digital effects and save in all major file formats with Sound Studio 3!

Sound Studio v 4.8.11 Aug 25, 2017 MacOS X Intel
Download Demo
Fixed a bug that prevented the user from using the Save As command because of a permissions alert.

Sound Studio v 4.7 Jul 29, 2014 MacOS X Intel
Download Demo
Changed how multi-track selection works. Now, you always select all tracks with the mouse, and use the Command key with the mouse to select only one track at a time.
Running the Fourier Analysis with nothing selected now selects all of the file.
Fixed input level clip indicator.
Fixed audio play-through bug.
Fixed saving in Apple Lossless format.
Removed Sample Size submenu in the Audio menu, because it never did affect the audio data while the file is open, and only applies to certain file formats when saving, so you can always change the sample size when saving.

Sound Studio v 4.6.2 May 7, 2013 MacOS X Intel
Download Demo
Fixed bug with opening multiple files at the same time, where audio data were jumbled together.
Fixed bug with opening AIFF-C files.
Fixed input level meter display issues.
Fixed audio glitches during playback and recording.
If an error occurs when trying to cross-license from the Mac App Store, the app will show a message in the Trials Left window on launch.

Sound Studio v 4.6.1 Mar 1, 2013 MacOS X Intel
Download Demo
Fixed missing audio channel selections in non-English Preferences windows.
The app can unlock itself if you already have purchased through the Mac App Store and have run it at least once. This allows you to get updates as soon as they come out and use more advanced features that are not in the Mac App Store version.

What's new in version 4.5.2
Fixed bug with missing audio input and output channel selection.
Fixed crashing bug with playback when fast forwarding, rewinding, or right-clicking in the window.
Fixed crashing bug when using the 3-band EQ, 10-band EQ, and Graphic EQ effects.
Fixed crashing bug with saving in FLAC.
Fixed latency bugs with audio playthrough and playback.
Fixed bugs with toggling looping during playback.
Fixed bug with using Save Selection As on an unsaved file.
Fixed UI bug with trying to save an MP3 file when LAME is not installed.
Fixed UI bug where keypresses were not being handled correctly in the markers sidebar in the document window.
Fixed other minor bugs.

Sound Studio v 4.5 Jun 2, 2012 MacOS X Intel
Download Demo Download Update
Snap to Zero Crossings.
Insert Markers in Gaps.
Insert Markers at Gridlines.
AppleScript support for editing audio file metadata (artist, album, etc.)
Increased marker font size.
Improved the visibility of marker, cue, and other lines in the UI.
Organized Audio Units menu if there are more than 30 plug-ins available.
Split By Markers automatically fills in the Number of Tracks field if it is left blank.
Last Filter is remembered across different documents.
Full screen mode.
HiDPI support.
Magnify (pinch and spread) trackpad gestures control zoom.
Support for restoring windows when quitting and re-opening the app.
Files are opened and converted on a background thread.
Preferences updated, including the addition of default sample rate and sample size settings.
Default system audio input and output device are settings now available in the audio preferences.
Timer recording, with a visible indicator that a timer has been set. (This used to be part of Auto Start/Stop Recording.)
Automatic levels-based recording with new, simplified UI.
Audio processing updated to use newer APIs.
When saving files larger than 4 GB, an alert is shown if the file format doesn't support such a large file.
Fixed bug where saving in Apple Lossless would not save the metadata and markers.
Fixed some AudioUnit loading issues.
Fixed a bug with copy and paste.
Fixed a bug where using the comma key to play or pause would not pause if there is no selection.
Uses AudioQueue for playback and recording.
Presets can now be imported by opening the .soundstudiopreset file with the app.
Updated Ogg Vorbis libraries (1.3.0 and 1.3.2 respectively).
Sound Designer II file format, which is an outdated file format that depends on the resource fork, is no longer supported.
Removed in-app help. All help is now on the felttip.com web site.
In preparation for App Sandboxing, the Scratch Disk is no longer a preference.
Requires Mac OS X 10.6.6 or higher.

Send an email to beta_2005@felttip.com to request a copy of this beta update

Sound Studio v 2.2.1 Jul 13, 2005 MacOS X PPC
Fixed bug in saving 16-bit audio which caused distortion in some cases. Fixed by clipping audio instead of wrapping around values outside of the valid range (-1.0 to 1.0) when converting from 32-bit float to 16-bit integer.
Fixed bug in Normalize which could over-amplify some sounds.
Fixed bug which prevented using iSight for recording.
Fixed bug which where Mix Paste would crash.
Changed Split By Markers to be more like version 2.1.1b3 behavior. Changed to always use two-digit prefixes (01, 02, 03...), to convert ':' (colon) characters to '-' (hypen).
Fixed bug where multiple tracks, with one shorter than others, would stop playback at end of short track
Fixed bug in window drawing code which would cause the window to redraw when no drawing was necessary. This also fixes the one-pixel-wide gaps that may show up in the waveform.

Sound Studio v 2.2b2 Jun 22, 2005 MacOS X PPC
Fixed recording and playback to prevent glitches, unless the computer is not fast enough.
Fixed bug where it would crash when handling more than 2 GB of audio data. Files are only limited by disk space.
Fixed playback cue bug which caused to to be ahead by 0.7 seconds.
Fixed bug in Mixdown to Stereo where resulting file did not play back in stereo.
Added "Open Audio MIDI Setup" button to preferences.
Fixed "Sound Studio Help" in Help menu and linked help buttons, and added help content.
Fixed bug where window was not scrolling when using arrow keys.
Added Japanese localization.
less...

lneuma1
version 2.1.1, MacOS X PPC
This program was good, I agree, but Lucius Kwok's entire rewrite of the program seems to be taking forever. In the meantime, he is losing a sizable customer-base that will be selecting other programs over his simply because of timing. Updates, even slight, would serve to keep us interested, but he doesn't take the time to even keep us informed via email of progress. Pity. Good potential out the window.

stoprunner
version 2.1.1, MacOS X PPC
The program has not been update since a long time, and many bugs remain in it. I was a fun of the soft, but after trying to get support for some time I gave up. It is a pity, because it had the potential for becoming a great audio soft.

Dom-i
version 2.1.1, MacOS X PPC
Good quality recording software. Comes with very usefull filters and 3, 10 or 30 band equlizer. Settings can be stored so you can re-use them. The only problem I have had is with copying large pieces. Sometimes the programs quits unexpectedly. But for simple recording and optimizing, this software works very good.